Infinite scrolling is a trending feature at website these days. Some call it perpetual scroll, while some call it auto-scroll and some have even named it as lazy-load.

Web developers think that a perpetual scroll helps them put the maximum info or the maximum content.

Trust me, the strategy of putting everything on a single page and having long scrolls doesn’t work all the time.

Remember, a website is not a book. Do not try to put it all on a single page. Giving your visitor a break is a good option. Instead, make the visitor go through your site in steps along with navigational facilities.

A page with too much content also reduces the page speed which is again a turn off for the user. Very few sites have a higher bandwidth which can bear the excess content. Otherwise most of the sites become slow because of the overloaded material uploaded on them.

Deciding on whether to have a never-ending scroll or having different small pages is not an easy task. It’s a tedious one in fact.

You have to go through different factors before finalizing on what your site should look like. First of all, you have to know the difference between the perpetual scroll and hard stop.

Here is a brief comparison between the two:

Perpetual scroll is the one where you have a trail of content on a single page, you have a list of things on a page which is going to be exhibited once the user logs on to the page.

Twitter is one of best examples for long scrolls. It exhibits a long list of updates and keeps scrolling down. But then again, it’s the type of the site too. Twitter surely has a different genre which pulls off this infinite scroll really well.

On the other hand, hard stop is an opposite thing. In this kind, you do not scroll down at all because the page has a very short length and it ends just where your screen ends. On these sites, they have various other pages where the information has been loaded.

Google search result page is the best example for the hard stop or a one pager.

It is simple, compact and focused. Google could have put a lot of data on its homepage just like Yahoo did.

But they chose to keep it simple and impactful. Looks like a real search engine which doesn’t need to prove itself.

Remember that in order to analyse the role of perpetual scroll in web pages, we need to gather a list of pros and cons for these scrolls along with some relevant examples of websites where it can really work.

In the perpetual Scroll, everything is in your reach and you do not have to switch to different pages for any sort of information.

In fact you will be able to have it all on the same page. You just have to scroll down and see.

In perpetual scroll pages, you can put in all types of content, information about the company, short posts, videos, podcast or anything.

Some sites have amazing layouts and these cluttered kind of structures seem very interesting at times. Some sites have excess of content along with images. They have heavy images which content-oriented.

Etsy is a great example of a ecommerce store with perpetual scroll. The store has a big grid of products on its landing page.

It might seem cluttered but is sure has put everything systematically on the page.

Pinterest is the best example of this. It has an infinite scroll with uncountable pins all over the page.

Pages with infinite scrolls gives room for higher creativity. You can play around with visuals, graphics and layout as the scroll goes down.

A combination of colors and designs can be used as the designer has more to play with.

See how Cyclemon put a perpetual scroll in its site and made it full of creativity and superb designing.

Perpetual Scrolls are super easy and friendly for the Touch users. Sometimes it becomes difficult for mobile users to click on small tabs and it’s easy for them to scroll down through the whole site.

It is tried and tested that infinite scrolls mostly takes more time to load thus they make the browsing really slow, putting the customers off and checking out from the site before it’s fully loaded/.

Nowadays ‘Lazy-Loading’ has trended a lot. In this kind of scroll, the page doesn’t load at once, giving the browser a rest and no pressure. It loads as the user scrolls down below the fold. Hence, this cuts on the page load time.

Most of the web developers haven’t used this type of loading and they blindly follow the infinite scroll trend and end up putting a lot of texts, images and videos on the same page, making it extremely slow.

So, it is better to use different tabs and proper navigation for making your user stick for long and not run away in seconds.

The visitor might get overwhelmed by the quantity of content that has been loaded on a single page. The user might be looking for something simple and to the point.

But when he sees that the scroll keeps going down and it is loaded with information that is irrelevant to his interest, then he leaves in a couple of seconds without any second thought.

The trick is to put relevant and limited content on a page. You can have tabs and navigators so every user goes to the page which is of his interest.

A perpetual scroll doesn’t even give a chance of skipping any data. Once the user has arrived on a particular page, he will have to go through it all even if he is not interested.

Basically, the user cannot skip the unwanted part because it has been permanently put down on the page.

Giving choices, tabs and various pages is definitely a good option where the user has the chance of saving time and selecting what he actually wants.

Perpetual or infinite scroll doesn’t really believe on the on-site navigation. It believes that everything should be there on the same page, and the user should have the ease of going through the whole content without clicking on any tab.

There might be an ease for the user but at the same time it also becomes a turn off for the user that he has to look on the stuff he is not at all interested in. There are no indicators for him to directly go where he needs to.

Sites with no tabs or navigators seem clueless and vague at times.

See how Smith Brothers has given precise and to the point navigation on their site.

The other kind of page is a one page site which does not involve any kind of scrolling.  Limiting scrolling intelligently can enhance your user’s’ experience and comfort, leading to a lot more conversions.

These sites have a main landing page which is only present till above the fold, there’ no scrolling down, hence no below the fold part, just like some major search engines.

Check how ‘Type Term’ has created a one page site and how beautifully they have put all the important elements along with navigators and indicators.

Mobile interface also does not support a lot of scrolling. Mobile friendly sites are mostly one page with lesser content, making main important CTAs prominent enough to be clicked at.

Pagination is another technique which allows to have various tabs or tabs like “previous” or “ Next” buttons to divide the content among more than one page and not to clutter a single page.

Some people get attracted towards this technique while other lose the attention span.

Make sure your tabs are visible, user friendly and significant so that the user doesn’t turn away thinking that there is no navigator taking them ahead on your site and it ends here only.

What Role Heatmap Plays in finding which length works?

As you all know that Heatmap is a tool which lets you see the visitor’s activity on your site. You can easily track your visitor’s behavior, his interests and the the elements which make him leave.

Scroll Map gives you a chance to see how much your users scroll on your site. Is you perpetual scroll making them stick or making them run away?

For this purpose, carrying out a ’Fold Test’ is the best strategy. The fold test allows you to see what really works for your site; above the fold or below the fold.

The elements present on your ‘above the fold’ sections are the ones which determine whether your visitor will stay or leave. So you really have to make those elements worth it.

There are different perspectives when we talk about scrolling. Some people say that people do scroll and they do not find any problem in scrolling, it is not fatigue for them.

While the others say that they lose the interest when they are not given proper indicators.

The graph shows how many people scanned the full page and scrolled down, no matter what the page had.

So basically, we know that people have learned to scroll down the web pages but most of the times they end up losing attention after seeing too much content or the slow page speed.

Perpetual scroll fails when the user is in hurry, looking for a single important thing, requires navigations or simply using a small mobile set and cannot handle much content.

It might work for the new generation who is pro reading and pro-searching but oldies might get confused and require guidance on each step.

On the other hand, a hard stop along with pagnition or navigation, proves to be much better as people like less crowded site with a single focus. So keeping it simple an clean does the trick.

However, some sites like Twitter or Pinterest are different example which want infinite scroll and all into that type.  Sometimes a page with very less content can be a turn off too and pagination can make you lose the visitor too.

So, it is better to first analyze what kind of site are you developing and then benchmarking and deciding which style to adopt, also take the help of analytical tools like scroll maps to see what your visitors would like to have!

Have a good time scrolling and finding out the answers

P.S. Do not irritate your visitors with a never-ending scroll. Try keeping it short 😉 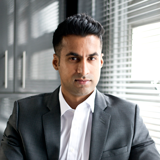 Hammad Akbar is a tech entrepreneur with a passion for technology and online marketing. In his short career, he managed to bootstrap two technology companies with minimum funds to multimillion dollar revenues. As the CEO & Founder of InvoCube and InvoCode, he managed to grow the companies separately to 80+ Staff members and multi-million dollar revenues within 2 years of inception.